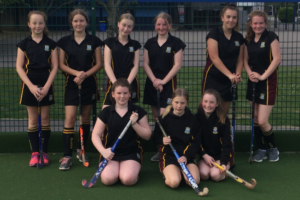 The year 8 Hockey team played their first match before half term – a friendly against Broughton.  They defended well against tough opposition and managed to hold Broughton to a two all draw at half time, thanks to both goals coming from Libby Earnshaw.  The girls fought hard in the second half to keep themselves in the game thanks to a third goal from Libby.  However, the experience of Broughton saw them win 6-3.  A great start though and the team has shown lots of potential.